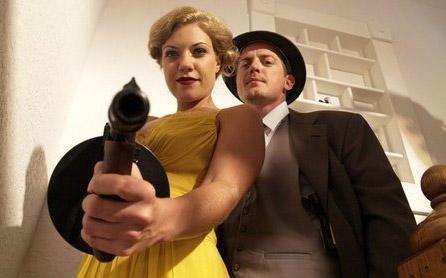 It takes a lot these days to get me to sit down and watch a low budget, independent feature. Spend enough time running a site like this one, and you see every level of dreck cross your desk, with the threat of having to view their awfulness taunting you like an impending dentist appointment. Needless to say, it's easy to get burnt out doing what we do. Fortunately for us, that's why we keep Casey around. He'll gladly take one for the team and throw himself in the way of a bad movie bullet for us, and that's why he's a stand up guy.

So I was just as surprised as you may be, that last winter while writing the horror news one morning I actually came across an interesting looking independent feature. It's called "Bonnie and Clyde vs Dracula", a name that instantly conjures up any number of scenarios, each one as zany as the next. It's a name that when repeated to my fellow horror critics and friends alike, has elicited everything from playful jeers to cautious curiosity. It wasn't the name alone however that reeled me in on that day, but also the casting. Casting that, to say the least, seemed a bit odd. Starring as our titular couple here are B movie mainstays Tiffany Shepis and Trent Haaga. Shepis cut her teeth in the 90's after winning a role in TROMA studios "Tromeo and Juliet" at the tender age of 16. Haaga, similarly, got his start as Lloyd Kaufman's whipping boy in the late 90's, putting in endless hours eating cheese sandwiches and pooping in paper bags in order to help make both "Terror Firmer" and "Citizen Toxie".

As actors and artists trying to survive and put food on the table by appearing in independent horror features, they've both had their fair share of ups and downs. Both though, to their credit, have amassed fairly impressive filmographies since their days at TROMA, and have gained their own little cult fandoms in the process. In "Bonnie and Clyde vs Dracula", the duo actually manage to do the unthinkable and add style and class to a project that very easily could have ended up on the opposite side of the scale. They sizzle on screen together with the kind of chemistry rarely seen in a feature whose means are so meager. To say that the two of them carried the film would be an understatement on par with saying, "gee, Tiffany Shepis looks kind of hot as a blonde".

Most of the story follows the fictionalized version of the real life couple of Bonnie and Clyde, who were sensationalized by the scandal hungry American press during the Great Depression. Petty thieves and gang members, the two traveled the Central United States together, knocking over banks, small stores, and leaving a body count in their wake that included at least 9 police officers. The film presupposes your knowledge of the duo, which is by no means a stretch considering how entrenched they are in American folklore at this point. In a wise move, the couple that we see here very much embodies the idealized, fictional versions of these famous characters. Clyde is a smooth operator - a strong and dapper Gangster type - and Bonnie, Unlike her real life counterpart, is played as a bloodthirsty sexpot who for most of the film is seen wearing the pants in the relationship.

Fallen on hard times and looking for a big score, Bonnie and Clyde meet up with their bumbling acquaintance Henry, played by F. Martin Glynn. After a hilarious scene in which his proposed bank heist falls through, the trio decide to knock off a moonshine distribution route that he has been given a tip on from an old friend. When the heist inevitably goes sour and leaves the group with a hot truck and a handful of dead bodies, panic sets in. In the aftermath, the toothless whorehouse bartender Jake has been shot, and in an oddly poignant moment, Clyde convinces Bonnie to go down the street to rouse a local doctor from his house to come down and help.

But as the audience knows at this point - thanks to several interstitials - is that the doctor down the road is not an ordinary doctor. Sprinkled throughout the first two acts, and the gangster film unfolding, are several vignettes that show you how a devious plot is taking shape right down the street. The good doctor, who is so badly deformed from a mysterious "condition" that he wears a bag on his head, has somehow acquired the body of the legendary Count Dracula and is attempting to revive him by feeding him whores he purchased from our good old buddy toothless Jake. The explanation is vague at best, but befitting of the odd, almost goofy tone of these scenes.

These wacky vignettes that sprinkle the first half of the film are a marked contrast from the hard-boiled, stiff lipped fun of watching Haaga and Shepis play off of each other. It's perhaps my only complaint, that in an otherwise entertaining picture, these scenes seem a bit forced. They're not helped by the strength of the other plotline, which leaves you wanting to return to our gangster couple as soon as we leave them for some development of the concurrent storyline.

Even with that gripe, it's hard not to love "Bonnie and Clyde Vs Dracula". Director Timothy Friend appears to be in a class above the average indie filmmakers currently working with digital. The cinematography is strong, shot composition obviously well planned out, and atmosphere palpable. To accomplish all three of these things while shooting on video is nearly impossible, and here he makes it seem easy. The action, blood effects and gunplay are also well done, with CGI substituting for squibs. It's an interesting decision that I ultimately decided didn't hurt the film in any significant way.

"Bonnie and Clyde vs Dracula" is probably the best film I've ever seen shot on a budget of this size. Haaga and Shepis are fantastic, the direction is spot on, and when it's all said and done it's just a fun movie to experience. Not only that, but you will find yourself surprisingly invested in their tragic love story. I could have used a bit more action during the third act, but that is a typical shortcoming of films with small budgets, so it's forgivable here. If you're willing to get past your preconceptions based on the title, and willing to take a little unabashed wackiness with your hardboiled Gangster/Mad Scientist film, then you will not be disappointed.