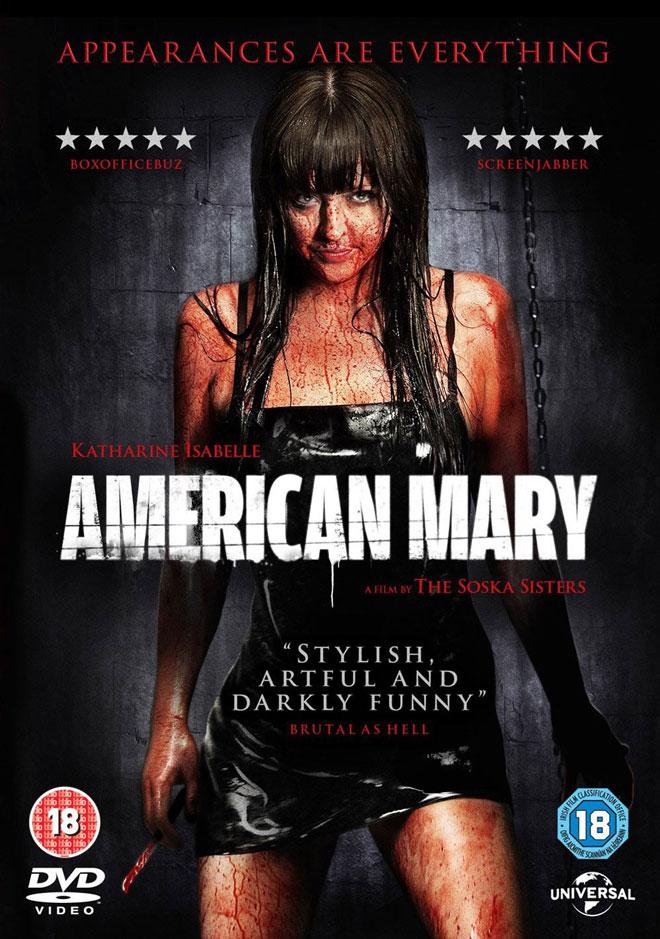 "American Mary" has been taking the horror world by storm lately, and it's easy to see why. It's directed by the "Soska Twins", Jen and Sylvia, a rising directing duo most known at this point for their dark horror comedy "Dead Hooker in a Trunk".

If you follow a lot of horror writers on twitter, it would seem like the Soska's are everywhere lately. They've engaged the horror community deeply, both online and in person, which has worked wonders for spreading the gospel of "American Mary". Moreover, it sees the return of Katharine Isabelle (the "Ginger Snaps" trilogy) to the genre, one she vowed to take a break from after appearing in "Freddy Vs Jason" to avoid being typecast. With "Mary", Isabelle and the Soska twins team up to create a rarity in the horror genre; a smart, nasty, female oriented horror film with a lot to say on top of it.

"American Mary" stars Isabelle as Mary Mason, a promising young surgical student singled out by her professors for possessing enormous potential as a surgeon. As much as she loves her work, going so far as to spend extra time practicing at home on turkeys, she leads an exhausting life. Balancing school with her full time job and studying, It's clear from the start that Isabelle is having some trouble keeping everything together. She's slipping at school, and is starting to fall behind on her bills.

This is the life Mary is leading as we're first introduced to her character, but all that is about to change in a big way. It's at this point she's introduced to the "extreme body mod" scene, an underground community of people with an intense interest in expressing themselves artistically by permanently altering their appearance through surgery. You've seen these people on the internet and bad talk shows; women who look like cats, people who split their tongues like a lizard, or my personal favorite, people who get plastic implants under their skin to give themselves devil horns. At first Mary is repulsed by what she sees… but the money is just too good, so ultimately she decides to go where the money is.

We soon find out that Mary is also "just too good". Despite the gruesome nature of what she's doing, Mary is incredibly good at it, and quickly acquires an underground following of devoted disciples to her work. She starts to enjoy it too, looking at herself as something of an artist. Things are going great for Mary, and then suddenly everything comes crashing down. She's violated in a horrific way by someone she trusts implicitly, and the ramifications of this event set the stage for the rest of her journey into the unknown.

Yes, "American Mary" is a rape revenge film for the 21st century, but it's so much more than that. In "I Spit on Your Grave", the revenge is immediate. It's supposed to serve as vindication for not only the main character, but also the audience. The credits roll after what's supposed to be the "happy ending"… the woman has had her day and balance is restored to the universe.

Here, revenge is also immediate and swift, but despite the satisfaction the audience feels it isn't the end of Mary's ordeal. She closes in on herself socially and sexually. In "owning" her masculinity in order to take revenge, she has given up what was left of her innocence. She's also given up her humanity, and by a certain point in the film we're shown that she has literally become a monster.

"American Mary" is thick with psychosexual politics in a way that is sure to leave a lasting impact on the genre. Even beyond the film itself, the fact that the Soska Twins are two beautiful, powerful women writing and directing this movie is not to be overlooked. In the same way that Isabelle's "Mary" attempts to make her way in a male dominated, aggressive world, the Soska twins are attempting to own a genre traditionally controlled by men.

And if you are a male going into "American Mary", be ready to do some self reflection. The men in "Mary" are shown as leering objectifiers. The Soska's play with this by intentionally injecting the film with its own sense of lurid sexuality. For example, Isabelle often performs surgeries in bondage gear. As she grows stronger as a character, so does her lure over the men around her. The Soska's even show up themselves in a titillating way. It's not that they don't want you to look, it's just that they want you to consider "why" you're looking, as well as the consequences of all that staring. It's bound to make some people uncomfortable, but it's a point of view the genre is sorely lacking.

To get to that point in "American Mary" however, one must overlook a few leaps in logic. Mary's professors make an awfully huge assumption about her early on in the film that changes the course of the entire story. It's brushed off with a single line without much explanation. Some of Mary's motivations can be a little confusing as well, although by the time the story's over, it's easy to brush these leaps aside. In that way, "American Mary" is almost best viewed as a dark fairy tale. The logic may not be bulletproof, but if you're willing to go along for the ride, the allegory is unforgettable.

"American Mary" is a delight of a film. It's equal parts "May", "Audition" and "I Spit on Your Grave". And despite its grim nature, it's exceedingly funny as well. It's great to see Katharine Isabelle back in the genre in a meaningful way, as the material gives her a real chance to show her range as an actress. As for the Soska's, "Mary" is a major step up for them from "Dead Hooker in a Trunk". That film could be dismissed as a fun, low budget romp. That is not the case with "American Mary". As proven by how fast it was picked up for distribution after its debut, "Mary", and the Soska twins, are a force to be reckoned with.

Tales From the Darkside: The Movie