Depp says Burton will be tackling his adaptation of "Dark Shadows" immediately after they finish up "Alice". No one seems to be asking if there's even potential in a remake of the cheesy TV vampire soap. Right now I'm more interested to see how his "Alice in Wonderland" adaptation goes.

I get it, poster for the festival hit "Dead Girl", lips look like vaginas. Actually, ya, that's a pretty sweet poster.

The Final One Sheet for "9"

Some nice images from the French zombie film "Mutants" I told you guys about last week. Still looking forward to this one, even though the small amount of buzz it's hard so far has not been great.

Another day, three more "Friday the 13th" Special Edition DVD's with horrible covers. And as someone who checked out all three that came out before, the new "special features" aren't all that special either. The one shining light here is if you're a fan of commentaries, because all three films (4-6) come with commentaries for the first time.

I'm not sure that this means anything, but it's wacky so here it goes. A Japanese Tim Burton fansite seems to have gotten its hands on a WB release schedule, and claims that they have "Dark Shadows", Burton's remake of the classic vampire soap, slated for a 2010 release in Japan. That's all the info available, and I linked to the Japanese site just for the fun of it so it's probably not worth clicking on it, unless of course you're really curious as to what a Japanese Tim Burton fansite looks like. Let's face it, who isn't.

George Romero's going to write Zombie novels now, apparently. Me, I'm still waiting for time to wash away the sour aftertaste left in my mouth from "Diary of the Dead", aka the worst student film I've ever seen. The man may have made some of the greatest horror films of all time, but that doesn't mean he's infallible, people.

For a while last year I was reporting on this film called "Cleavagefield", which appears to be some kind of softcore spoof on "Cloverfield" only with you know, more boobs. Then I realized that the joke was kind of over and my coverage was a little embarrassing, so I stopped. Today there's a story that was too funny to pass up though, with news of the "Cleavage" field monster revealed! Hmmm... sort of looks like a cross between Dino from The Flinstones and one of those blowup things you see in front of car dealerships when they're having a big sale. In other words, classy.

IGN has a new "Terminator" salvation poster. Every morning when I wake up I punch myself in the face for letting McG get me this excited about one of this films. One things for sure, the man knows how to work a fanboy.

It turns out that Johnny Depp's production company is actually PRODUCING the "Dark Shadows" update that's been in the works for a while. They hope to shoot in the Fall, and although nothing's official yet, it's reported that Tim Burton is Depp's "first and only choice" for director. Stay tuned for more.

"Martyrs" hits DVD in the states on April 28th, 2009. Here's your long awaited chance to check out the hottest foreign horror property out there right now. That date is now just a little more than a month away. 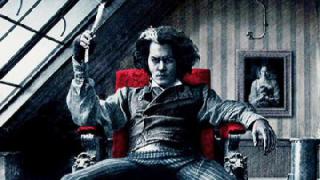