Khalid Laith and Razane Jammal have both signed on to play roles in the upcoming Tobe Hooper flick "Djinn" which focuses on a couple who finds their luxury apartment is inhabited by some sort of demon type thing that plays tricks or something. I have no idea who either of these guys are but I would never admit that though because I'd be too afraid that it sounds racist. Oh boy, I've said too much. Really need to get that backspace key fixed.

On the heels of the release date for "Piranha 3DD" being pushed to a November 23rd Joel Soisson has been brought in to produce the flick along with fixing the script. I have no idea how you could screw up a script that probably goes something like "girl takes off top, fish eats girl, repeat" but what the hell do I know. Maybe throw in a "nude girl swims with other nude girl to weird music". Wait that's been done? I'll never make it in this town. 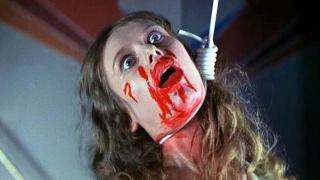