Wes Craven is a busy man this month! Rogue Pictures has announced that they will release his next film "My Soul to Take" on October 29th. Here's hoping that grand master Wes can give us horror fans a better Halloween treat than 'Yet Another Saw Movie'.

Lars von Trier has let it be known that he will next be visiting the end of the world with his apocalyptic thriller "Melancholia". Few details are certain at this time but early rumors claim that the movie will involve Earth colliding with another planet. So far, there has been no mention on whether or no Willem Dafoe's penis will make an appearance or not.

"Alice in Wonderland" scribe Linda Wolverton is working on a live action "Maleficent" screen play. If you're currently scratching your head, Maleficent is the evil queen from Disney's 1956 classic "Sleeping Beauty". Even stranger, Tim Burton is said to have taken keen interest in the project and may be lining up to direct.

After finally un-wedging his bulk from the seats of Soutwest Air, Kevin Smith lets it be known via his twitter account that they are finally ready to begin on "Red State". From Smith, "Looks like we start shooting this July. Took nearly three years, but we're finally ready to roll on Red".

If you thought the 2008 "Death Race" was a one shot deal, you were wrong! Universal Home Video has announced the direct to video sequel "Death Race: Frankenstein Lives" starring Luke Goss in drivers seat. Joining him will be the likes of Ving Rhames, Danny Trejo and Sean Bean, which makes you wonder which part of the track their careers crashed in.

"Taxi Driver" appears to be the next film slated for a modern remake but could there be actual hope for this one? Rumors were confirmed that Martin Scorecese, Lars Von-Trier and Robert DeNiro are all involved, with a strong chance of DeNiro reprising his Travis Bickle role.

Just off of the news of Neil Marshall's next epic "Centurion", the director has spoken of his plans to step into the producers chair for Ian D Fleming's "Ghosts of Slaughterford".

Ever read the synonymous trio of books written by Dean Koontz? Neither have I, but they are now slated for the feature film treatment. 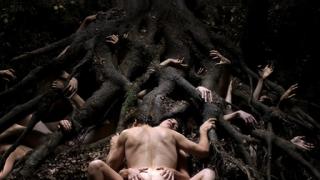 Lars Von Trier: The Man Behind the Madness

Bruce Willis to star in "Grimm", a ghost story with one of the longest synopses I've ever seen... which can be found at the link. Directed by Russel Mulcahey, who also helmed 2007's "Resident Evil: Extinction".

Lars Von Trier's controversial film "Antichrist" has been picked up by IFC films. Hot off the controversy it caused at Cannes with its graphic violence, the film will now be coming to US shores as early as this summer. No word on what type of release IFC will give the film, but they are known for non-traditional theatrical/on demand models.

New Platinum Dunes blog on their "Nightmare on Elm St." shooting. Of course they're going to be positive, but word is that Jackie Earle Haley's rendition of Krueger is just as kick-ass as most of us have anticipated. Don't get me wrong, I'm still withholding excitement, but consider my curiosity peaked.

Remember how the acclaimed Swedish vampire film "Let The Right One In" was just released on DVD? Thanks to some sleuthing over at Icons of Fright, it was discovered that the subtitles have been almost criminally changed from the original English subs on the Swedish DVD. The cumulative result, as the writer puts it, could be construed as a "dumbing down" or "watering down" of the subtlety and strange dark humor of the film. At the link, an exhaustive description of the changes including screen caps to illustrate the point.

Producers speak on both remakes of "The Birds" and "Poltergeist". They seem to have a healthy respect for the originals, so I'll at least give these a shot, even if neither one really needs a reboot.

Here's a naughty still from Lars Von Trier's "Antichrist", which is about to make its debut at Cannes. The psychological horror film stars Willem Dafoe and is about a couple who retreat to a cabin in the woods following the death of their child.

Now this is more like it, if you're interested, here's 20 hi-res stills from "Blood: The Last Vampire". Japanese school girls... that is all.